Return of all the Buildings and Establishments at New Castle reported by Mr Rodd the Superintendent of Public Works
As being the Property of Government shewing their present actual state etc. August 27th 1829 no. 147/143 (NRS 905, Letter No 32/4776 [4/2146] Courtesy of NSW State Records)


Gionni Di Gravio, Archivist of the University of Newcastle and Dr Ann Hardy discuss their recent trip to NSW State Records to photograph three bundles of hitherto lost documents of Newcastle in the late 1820s and early 1830s. The documents relate to an inventory of public buildings in the township that were being readied for what appears to have been the first privatisation prior to the Australian Agricultural Company take over of the Government Mines. They provide a digitised copy and transcription of one of these documents, and the importance of this information to the creation of the 3D early Newcastle model currently being constructed by artist Charles Martin for the University’s Coal River Working Party.

At the end of 2012, historian Rosemary Melville provided Gionni Di Gravio with a photocopy of an 1829 document entitled “Return of all the Buildings and Establishments at New Castle reported by Mr Rodd the Superintendent of Public Works As being the Property of Government shewing their present actual state etc. August 27th 1829 no. 147/143″
(NSW State Records – NRS 905, Letter No 32/4776 [4/2146])

The photocopy was very hard to read in places, so he asked his colleagues at NSW State Records to locate the original, in order to get a better copy. A couple of weeks ago they rang to say they were unable to locate the original, but found another, that was a copy, along with annotations. This was great news. But the very next day, they rang again to say that they not only relocated the original, but three bundles of files relating to it. Everyone was overjoyed. Many thanks to the staff of NSW State Records in Sydney especially Fiona Sullivan, Gail Davis and Chris Shergold. And thanks also Senior Archivist Janette Pelosi, whose previous “dream job” reading her way through the 1832 correspondence created the entry in the NSW State Records documentation which led her colleagues to locate the file.

The full 1829 document along with transcription can be downloaded here:

Return of all the Buildings and Establishments at New Castle reported by Mr Rodd the Superintendent of Public Works As being the Property of Government shewing their present actual state etc. August 27th 1829 no. 147/143 with Transcription by Gionni Di Gravio (13MB PDF)

Descriptions of selected buildings and features located on the 1830 Armstrong Plan, and overlayed on Google Earth.

A selection of features and their descriptions, along with 3D virtual images provided by Charles Martin. More on Charles work can be found here:

Where is it? Light House Situated on the Headland and South east of the Town

Who occupies it? Signal and Fire men

What condition is it in? This is an octagon weather boarded building designed after the Chinese style of architecture. The top part is perfectly weather proof. The ceiling of the lower floors all down owing to the rain finding its way in at the step which surrounds the building at the height of the lower story it not being covered by lead or copper but only with pitch which has melted away. The top mast of the Signal Staff is decayed and requires replacing. The Telegraph post is split and requires securing by means of two screw bolts. The platform of the Battery on which is six iron 12 Pounders mounted on old fashioned wooden garrison carriages requires, repairs as do also the carriages. The Guns, carriages, signal staff, Telegraph and Light House wants painting.

Where is it? The Wharf [Where situate is not noted, but once stood at the extremity of Watt Street (formerly George Street)]. Now under the roundabout adjacent to Newcastle Railway Station.

What condition is it in? The Wharf is of Plank supported by Beams resting  upon Piles, which are  nearly eaten through by the worm  –  [100?] by 23 feet.  The steps of wood require to be renewed having decayed and quite dangerous.

Where is it? Watch House

Who occupies it? Police and Bell man of the Public Works Department

What condition is it in? This Building 27 x 21 feet weather boarded with brick lined noggin consisting of two rooms and two cells for one of the latter requires repair at the back is a small octagon tower containing a Bell to summon the working parties some of the weather Boards of the Tower want replacing. 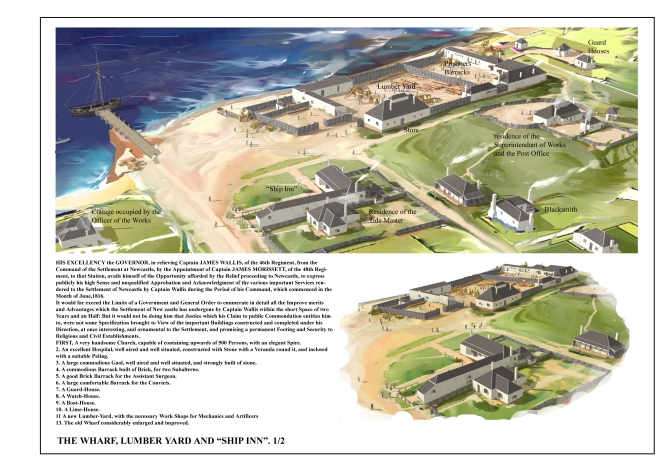 Where is it? Lumber Yard situated at the north end of Watt St. and the East Side Newcastle Wharf

Who occupies it? Public Works Department

What condition is it in? This Yard is separated from that of the Prisoners Barracks by a high wooden fence on the east side, on the north side by a similar fence, on the west by a high brick wall rough cast.  Its various shops to the south side thus forming the yard which covers a space of ground 186 x 173 feet.  The Carpenters shed is 45 x 15feet and requires saddle boards the whole length and a few weatherboards replacing at the closed end.  The Blacksmiths shop is 70 x 30 feet of Brick and well constructed but requires new shingling entirely.  The Watchman of the Lumber Yard has a small brick lodge within the walls 12 ft. square at the entrance into the yard in good repair.  There is adjoining  a small tools house 9 x 6 feet and a lime shed 30 x 9 feet of logs in good repair.

What do we propose be done with it? I proposed partitioning off 25 feet from the west end of the Blacksmiths Shop for the purpose of making a store and two small rooms for the Superintendent and Clerk’s Offices. 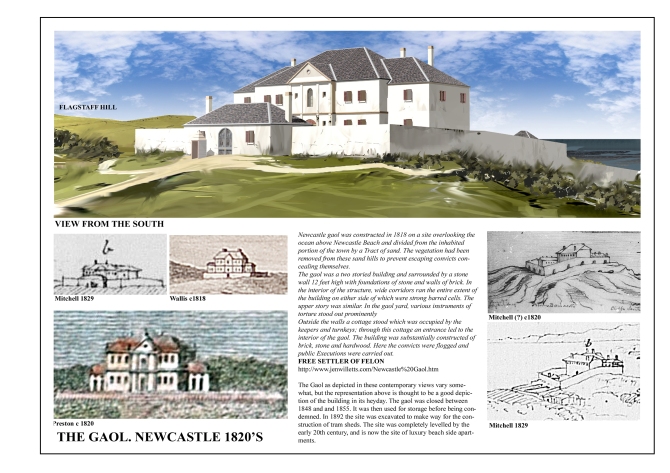 Where is it? Gaol is situated on the rising ground to the Eastward of the Town

Who occupies it? Criminal Prisoners and Debtors

What condition is it in? This Building is 87 x 37 feet of stone rough cast having two stories an entrance porch in which is two Gaolers rooms surrounded by a high brick wall rough cast the whole covering a space of ground 140 x 105 feet. Three rooms and ten [cells] on the ground floor and seven rooms above require some repairs viz some shingling new Iron bars to strong room ground floor. The inner wall is a crack indicating a settlement but of no great consequence some flags require relaying. There is a considerable crack and settlement in the outer brick wall at the north east corner, which ought to be supported at the angle by buttresses. The Gaoler complains of the Debtors escaping from the yard owing to the Cook house and Privy being situated too near the wall.

What do we propose be done with it? In the event of a future arrangement by which this Building should not be required as a Gaol it might be converted into a Military Barracks.

Where is it? The Church

What condition is it in? A stone Building the outside Plastered. A Square tower at the East End, surrounded with a small shingled spire. At the West end circular. The roof over the circular end appears very much sunk. I should think the rafters had given way –  The tower spreads at the top 10 inches being split, and is much out of the perpendicular. There is a crack in the circular end and the Plastering is fallen from the outside of the west side of the Tower.

The Pier or Break Water

Where is it? The Pier or Break water

What condition is it in? This is of Stone, it is raised too high for a Break water, and I conclude from this circumstance, was not contemplated for that purpose when undertaken. But rather as a Promenade to the Nobby – its being continued at its present height, would be very injudicious rendering it more liable to damage in stormy weather; it should not be more than 8 feet above high water mark, but it is now twelve feet and is higher at it termination that at the commencement ,which is also the [inverse?], since it should be lower  in the middle than the ends, by way of an inclined plane to facilitate the progress of the works.

The interior and exterior slopes are not sufficient. I do not consider these to be any natural obstacle to prevent the continuance of this work having taken the soundings immediately in the line of its directions as well as at some distance on each side of that line generally finding two fathoms, and in no case more than two and three quarters. –

In communication with Mr Livingstone the Master of the Lord Liverpool  Packet who has had the opportunity of I believeing some years experience and observation and also having had the benefit of the nautical experience – Lieutenants Caswell and Lieut. Wood both of the Royal Navy –  I concur most fully with them in opinion that it would be most advisable to continue the works for the good of the Harbour; The Channel into which is now rapidly filling up but would be most decidedly cleared by the force and direction given to the water, when the Boat Passage shall be stopped.

There is a probability of free stone upon Mr Platts property which I visited and inspected, close to the River side about six miles from Newcastle,  and I recommend it should be opened, having reason to believe good Building stone and flogging, might be got there a great desideratum for Newcastle, the stone being unfit for building though hardening under water –  In the event of a quarry being found it would be best for the upper part of the Break water to be built with it.

I apprehend Mr Platt would not object as it must greatly benefit his Property. An Overseer and ten men would make sufficient progress in uncovering it in a fortnight or three weeks to enable a better judgement to be formed of it.

Where is it? No. 1 Windmill & House situated on the rising ground to the South West of the Town

Who occupies it? Mr Riley

What condition is it in? A Brick Mill rough cast circular 32 feet Diameter and 38 feet altitude. The sails and main shaft have been carried away but the materials for new sails are upon the premises. A new main shaft and driving wheel are already put up. A few shingles wanting and some of the bricks are much decayed. There is attached a brick noggin Cottage 48 x 13 feet almost down.