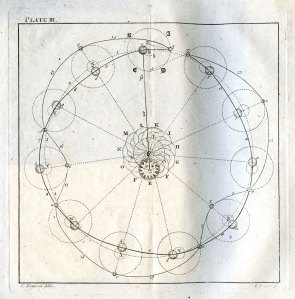 On the 40th anniversary of the lunar landing University of Newcastle Archivist Gionni Di Gravio discusses early (fictional) accounts of journeys to the moon dating back to AD 160 and their inspiration towards the quest for lunar exploration that culminated in the Apollo landing on this day in 1969.

A beautiful and brief introduction to early works dedicated to travels to the Moon can be had in Lester G. Wells ‘Fictional Accounts of Trips to the Moon’ published in 1962. Wells was the rare books librarian of Syracuse University and wrote brief introductions to a number of works that documented imaginary voyages to the Moon.

According to Wells, Lucian of Samosata’s ‘Vera Historia’ (True History) was the first work of science fiction, and written sometime in the 2nd century of our era. It contains the first journey of a man to the Moon. In it Lucian travelled to the ‘great country of the air’ by a whirlwind that propelled his ship to the Moon. On the Moon he found the inhabitants to be quite advanced, they adhorred filth, had no knowledge of sex, and when they died they dissolved in a puff of smoke. The Moon men could observe the goings on the Earth by a glass bottom at the end of a deep well.

Another of Lucian’s works, the ‘Icaromenippus’, contains another journey to the Moon. The traveller, in this case sticks wings  (from a vulture and eagle respectively) to his body. When he arrived at the Moon he didn’t like it there and so proceeded onto Heaven, where the immortals have him packed back to Earth via the swift and secret messenger Hermes. 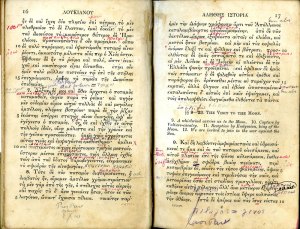 'The Visit to the Moon'

'Manners and customs in the Moon'

Here is a schematic history of imaginary voyages to the Moon:

AD 160
Lucian of Samosata travels to the Moon in his Vera Historia and Icaro-Menippus, using a waterspout/whirlwind to carry him upward and an artificial set of wings of eagle and vulture respectively.

1516
Lodovico Ariosto in the Orlando Furioso makes his journey to the Moon via a chariot pulled through the sky by powerful horses.

1638
Bishop Francis Godwin – The Man in the Moone or, A Discourse of a Voyage Thither by Domingo Gonsales – The Speedy Messenger 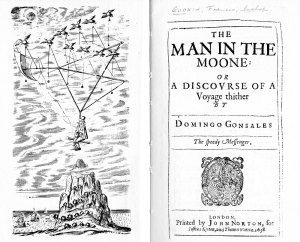 First account in English of a journey to the Moon. Shipwrecked on an Island, the hero, Domingo Gonsales, manages to train birds to lift things into the air. One day while experimenting with a trapeze contraption he is taken by them directly to the Moon which took 11 days. He experienced diminishing gravitational pull (incidently he wrote this half a century before Newton proposed his principle of gravitation). On the Moon he found men twice as big as earth men, no disease, moved by leaping and fanning themselves along. Gonzales speaks with them about a number of subjects including Spanish wine and Antwerp beer. The prince of the Lunarians gives him a jewel which allows him to return to Earth taking only 9 days because of the ‘Earth’s pull’.

Lunarians spoke in a form of music

1638
John Wilkins – The Discovery of a World in the Moone or a Discourse tending to prove that ’tis Probable there may be another habitable world in that planet.

This was a scientific/philosophical work where he advanced 13 propositions concerning the nature of the moon and the possibilities of creating craft to get there and establish a colony there. These craft would be propelled by flying wings or ‘a flying chariot’. 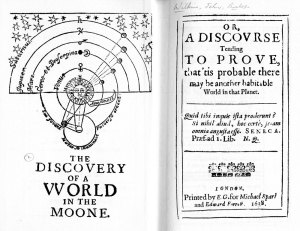 Cyrano proposed a number of methods of getting to the Moon. One method was the use of bottles full of dew which were drawn up by the sun, but unfortunately he fell to earth in Canada. He escaped the Canadian barbarians and created another method which was a iron cube with a loadstone that formed an iron machine that took them to the Moon and another using wings and a spring attached to rockets. Covered his body with beef marrow  and the Moon sucked him up. Therefore he was the first to reach the Moon in a rocket ship.

Description: Moon inhabitants were spirits, conversing while making gestures with the body. Wore no cloths and ate by inhaling fumes from boiling meats. They lived in a sensual world.

Proposes spring mechanism attached to mountain in order to propel voyager to the Moon. Discussion of Cyrano’s description of the Moon, along with conversation with a ‘God Like’ Person he met on the Moon.

1705.
Daniel Defoe – The Consolidator: or Memoirs of Sundry Transactions from the World in the Moon Translated from the Lunar Language by the Author of a True-Born English Man.

He reached the Moon with a flying machine propelled by fuel. On route he took a tranquilizer that numbed him. On the Moon he found things much like the Earth, no differences in the living things at least. He satirizes English political life along the way.

1827
Joseph Atterly (Pseudonym of George Tucker) – A Voyage to the Moon with some account of the manners and customs science and philosophy of the people of Morosofia and other Lunarians.

He constructs a space ship of a special metal substance (which a holy Brahmin hermit  taught him about) called a ‘Lunarium’. The ship was made out of copper, and fitted with doors and windows. Quantities of Lunarium was placed outside the ship and controlled from the inside. They discussed a number of topics before landing on the lunar country of Morosofia and proceeded to a town not as large as Albany. Thee Lunarians were tall, thin and of a yellowish complexion. The houses were constructed with half underground to protect from the sun’s rays. The residents were the same as though on earth, born without intellect, they moved as automatons until a ray from the earth illuminated them. They became knowledgable while the earth man lost theirs. They were called Glonglims. They practiced birth control, had no capital punishment, arbitrated all disputes, bred animals to improve strains and had invented steam cookers. They (Atterley and the Brahmin) entered their copper balloons and returned to earth on August 20, 1825.

This is an account of a Dutchman’s trip to the Moon in a balloon. He built a cloth balloon, coated with rubber attached to a wicker basket. Filled the bag with a gas manufactured by combining a particular metallic substance with a common acid.

1836
John Russell (attributed) – Adventures in the Moon, and other worlds.

A breezy tale of comfort and ease of space travel, with the Moon being the place where everything that was ever lost from the Earth lies, dreams of youth, words once spoken, various passions and traits.

First hand observations made in Africa by Sir William Herschel and his son, of the Moon real close up to examine all life there from five miles away caused a sensation not unlike Welles’ War of the Worlds.

Nature had carved columns of green basalt, hills covered in amethysts, mountains in sapphires and rubies. Creatures were simians between man and anumal, like lunar batmen, 4 foot high, short glossy copper coloured hair and wings of a thin membrane.

He selected a space gun as the means for propulsion to the Moon via a projectile with a scientist inside like a bullet. The Baltimore Gun Club constructed the cannon called a Columbiad which was propelled on an orbit of the Moon from which they would make close observations before firing rockets to send themselves back to Earth. No life.

3 thoughts on “The first journey to the Moon”