The Birdwood Flag After Conservation-2017

This blog, and the ones that will follow, look back over three and a half years to detail the preservation and conservation measures that returned the restored Birdwood flag to Newcastle’s Christ Church Cathedral in July 2017.

The posts will be presented as a narrative, relying on my own notes, images and memories and interspersing this narrative with comments from other members of the Birdwood Heritage Committee. The aim is to make an account that includes a variety of perspectives so that community members gain knowledge they can use in their own preservation projects.

“A journey of a thousand miles begins with a single step…”

The Birdwood Flag’s preservation story is well described by applying Lao Tzu’s quotation above. The first definite steps in restoring the flag were made in November 2013 following a number of comments on the flag in previous years. The reality we faced was thousands of fragments of mostly reddish looking textile stored in a plastic back within a large cardboard box in a damp vault of the Cathedral.

The Birdwood Flag Before Conservation-2013

The other reality was the complete absence of any substantial funding and support that would be required for a major restoration. No group of people who might have the expertise to manage such a project could be identified and the one conservator at the University of Newcastle, myself, was so occupied with other projects, there was no time available, even for discussion or planning. Everything had to be established and negotiated from scratch. As a conservator, I knew this would involve the creation of a strategy for preservation of the flag to gauge the feasibility and practicality of the process. Only then could there be some negotiation between interested groups (including the University and the Cathedral) and then applications for resources, grants or other help through public and private benefactors.

As a principle of conservation, the level of material disintegration of an object is also considered. The Birdwood Flag’s utterly fragmented and delicate state would usually rule it out of consideration for restoration. The time for conservation would be judged as having expired so that any effort to restore it would be seen as pointless or worse still, as endangering the authenticity of the item. Indeed, such conservation would be perceived as blurring the lines between conservation and total re-construction of the item.

However a different principle of conservation argued against dismissing the idea of conservation and labelling the Birdwood Flag as a hopeless case. The significance of an item, be it art-work or monument, argues for or against the dedication of scarce resources to preserve it. Even so, the integrity of the item’s fabric is very important in deciding its significance. An item can only be considered as significant if enough of it remains to show what it is.

There was a Catch 22 involved with arguing the significance of the Birdwood Flag in its disintegrated state. To do this, some assurance was needed that it could be put together and made recognisable as a flag of a particular design, dimension and colour. A bag of confetti does not easily lend itself to such an assurance. Many people engaged in cultural heritage work experience such dilemmas. This is the moment when a project is often abandoned. However the Birdwood Flag was too important to be forgotten. It narrates the sacrifices of soldiers of a nation established only 15 years earlier during one of the most cruel and catastrophic wars in human history. Moreover the flag tells a story above and beyond a tale of WWI. Produced by a community yet official, flown on the battlefield yet returned to the community who built its own War Memorial and ‘laid up’ the flag there, this object provides important evidence for larger historical and social enquiries.

The Birdwood Flag has been restored and this blog is being published 31 July 2017; the day after the Birdwood Flag was re-hallowed in a special service to mark its return to Christ Church Cathedral, Newcastle. The brochure, Two Lives, tells the story of the one hundred years between the first making of the flag and its successful restoration and return. Further blogs will show the steps during three and a half years that brought us to this day. 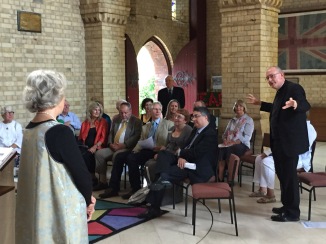 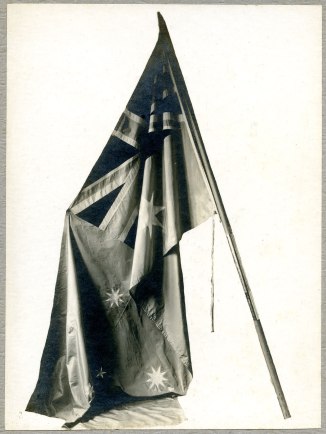 The Birdwood Flag in its original condition. [Courtesy of The University of Newcastle’s Anglican Diocese Archives in Cultural Collections A6137(iv)]

Named in honour of General William Riddell Birdwood, the commander of the Australian forces on the western front, the Birdwood Flag Restoration Project aims to piece back together, and restore this highly significant Australian flag that served as the Australian ensign in World War 1. The Birdwood flag is of high national historic significance as it was the first recorded, and officially sanctioned presentation of an Australian flag in the field of war, created by a local community. Moreover, the Birdwood Flag is of outstanding social and historical significance for people of Newcastle since the funds raised for the flag’s creation and manufacture came from a public appeal organised by Miss Dora Sparke and the Newcastle Field Force Fund.

The story of the Birdwood Flag dates back a century ago, when a group of women in the Hunter, led by Dora Sparke, gathered the resources to send an Australian flag to fly over the ANZAC troops in Europe. These women took it upon themselves to make the lives of Australian troops a little better. For instance, they didn’t believe the standard issue socks that were provided to troops were of sufficient quality, so they set about knitting their own, that would be of superior quality and comfort. They also decided that it wasn’t good enough that our troops didn’t have a real Australian Flag to fight under, and so they set about manufacturing one, that ensured it was officially sanctioned. The work of the Newcastle community was presented at the General’s headquarters on a battlefield in Belgium, in September 1917, and served as the emblem of Australian soldiers during the war. It was to be passionately guarded until the time of victory.

It was during his national tour of Australia in 1920, that General Birdwood took the opportunity to offically hand back the Flag to Miss Dora Sparke, at a civic reception held on the 28 April 1920, and with it The Birdwood Flag returned to its cultural home, the city of Newcastle. It was perceived as a “memento of a glorious cause, and we would do all in our power to see that it was placed where no other enemy but Time could destroy it”. Beyond the intentions in its production, the flag is also an interesting symbol of the formation of Australian nationhood. Its use signifies the distinct identity of the Australian soldiers as a significant collective. What makes the flag even more significant is that such a declaration of national identity occurs about a decade after the Federation in 1901 and many years before recognition of the Australian national flag in 1954 under the “Flags Act 1953“.

Following the Birdwood Flag’s rediscovery in 2013 lying in pieces within a shoebox inside a safe in the Cathedral, a meeting was held between the University of Newcastle’s Vice Chancellor, Caroline McMillen  and the Dean of Christ Church Cathedral, The Very Reverend Stephen Williams, to see what could be done to restore what was probably the most important cultural relic of the Great War in Australia, in anticipation of the Centenary of ANZAC commemorations. Inspired by the local community’s spirit, an action plan was formulated for the restoration of the rediscovered fragments of the Birdwood flag.

The Birdwood Heritage Committee (Birdwood Flag Committee) was formed under the leadership of Dr Patricia Gillard, and initial funding secured through the National Library’s Community Heritage Grants to complete the significance assessment phase.  In 2015, a funding application to the Copland Foundation was also successful. As a result of the committee’s efforts the restoration phase of the Birdwood Flag has offically begun since April 22, 2016.

In this project, the Copland Foundation, Melbourne, International Conservation Services, Sydney, University of Newcastle (Australia) and Anglican Diocese of Newcastle’s Christ Church Cathedral, are collaborating to put the pieces of the flag back together again and tell the story of the community who enabled an official Red Australian Ensign to represent their troops during World War 1. As part of the ceremony a time lapse movie was screened showing the beginnings of conservation work being carried out by International Conservation Services in Sydney. It was quite an emotional moment to see the original stars of the Southern Cross begin to re-emerge within the fragments of the original flag.

Over many years our communities have become fraught with divisions and fragmentation, with people generally striving to seek their points of difference, rather than what they hold in common. It is hoped that this project is a small step towards bringing Australian communities closer together, as, in reconstructing this fragmented symbol of a local community’s care for its troops, so too it is hoped that the nation will rediscover its fragmented heart, and understand the forces that have shaped Australian national identity and the makeup of its culture and character.