If you studied at the University of Newcastle (Australia), Newcastle Teachers’ College, or Newcastle CAE/HIHE,  you may enjoy a trip down memory lane by browsing through some of the diverse selection of serials published by student societies or by the institutions themselves.  These include:

All of these serials are held in the University Archives.

If you have some recollections you would like to share with the world, we have some instructions.

The Hunter Institute of Higher Education was a multidiscipline tertiary institute catering to the demands for higher education in the Newcastle and Hunter Valley Region. The Institute was declared a corporate college of advanced education by the Minister for Education on October 1, 1974 and was governed by a Council established under the Colleges of Advanced Education Act (1975) of New South Wales. The Institute achieved full corporate status upon the gazettal of its Bylaw on February 25th, 1977 and the reconstitution of its Council from April 1, 1977.

Teacher education still played an important role for the Institute but in the 13 years prior to 1989 had seen an expansion into the areas of visual arts, paramedical and community welfare studies, nursing and administration and technological studies. In the total complex there were art studios; craft rooms; science, woodwork, metalwork, and materials science laboratories; geography, history and social science rooms; home science, cooking and food science laboratories; needlework and textiles rooms, mathematics lecture and computer rooms; music rooms; music practice rooms; general lecture rooms and theatres; a Physical Education complex incorporating two fully equipped gymnasia, a dance studio, health studio, change rooms and lecture facilities, with adjacent courts and playing fields; sound studio; photographic rooms; and cafeteria. The Library consisted of a single floor reading room, including study areas, offices, typing rooms, stacks and catalogues; and a second lower floor which includes an audio-visual teaching aids resources centre, tape recording rooms, visual education rooms, a language laboratory and extensive storage space for films, cassettes and records. In 1988 the Institute had a student enrolment of 4,300, an academic equivalent full-time staff establishment of 237 in 14 departments and a general staff establishment of 283. The Institute’s vocational courses were offered through four Schools; the School of Administration and Technology, the School of Health, the School of Education and Humanities and the School of Visual and Performing Arts. A Council of members drawn from the community, the staff and the students governed the Institute. 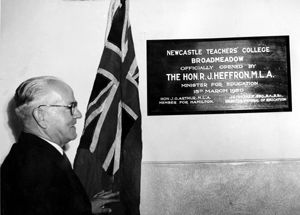 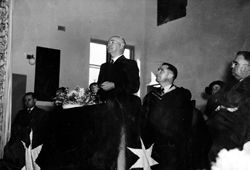 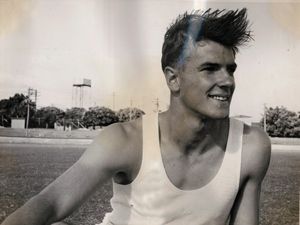 From the Altjiringa Annual: Magazine of the Newcastle Teachers’ College Vol.5 No.8 1953:56:

Newcastle Teachers’ College has a “ghost” – Joe Fanatamy, a student who ever existed. The legend arose at the start of a college year when a teacher who was new to a group of students called the roll. On it was a smudge where a name had been obliterated, but was added further down the roll. She asked what the smudge stood for, and a student quickly thought up a fictitious name, Joe Fanatamy. After that whenever she called the roll one of the men students answered to Fanatamy. On occasions when it was dangerous to do so Fanatamy was “sick”. It was not till the end of the term that she discovered that Fanatamy did not exist. He then became the college “ghost.” Whenever anything was lost or mislaid it was Joe Fanatamy’s fault. Last night his name even intruded into a folk song. In an “Evening of Music” by the College at the Newcastle Technical High School’s assembly hall, much to the delight of the students.

Student enrolments had grown to 800 and number of lecturers to 46.

Stage 1 of Waratah West campus completed and occupied by 1971.

College was declared a corporate college of advanced education and so named the Newcastle College of Advanced Education or NCAE, opened by the Governor General of NSW Sir Roden Cutler on November 23rd 1974. 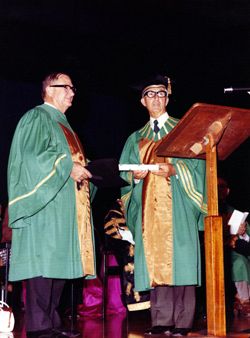 Amalgamation with University of Newcastle and Newcastle Branch of the Conservatorium of Music.