Newcastle University Archivist Gionni Di Gravio discusses a mysterious stone book donated to the University of Newcastle in 2003. Click the images below for various views of the object.

In 2003 a mysterious stone book was donated to The University of Newcastle and it has kept us guessing as to its origin and purpose.

The book is approximately 8.5cms by 7cms by 2.5cms and carved from medium grain sandstone. The stone book was donated to the University by staff member Robert Stephens, who donated the book after viewing a collection of ancient artefacts from Roman Britain in the library.

The stone artefact had been passed down from his grandfather to his father and on to him. His understanding was that prior to the age of printing, when books were rare, these stone books were carried by people to church.

In February 2003 there was an exhibition of such stone books at the Gallery Lombardi. The owner stated that “many of the stone books are dated late 1800s/early 1900s and have the words “Bible” or “Holy Bible” carved in them and a few are inscribed with names. I understand that these were carved as memorials to departed loved ones. Some are crude while others are beautifully carved and inlaid. All are representations of a closed book – never to be opened.”

A local necrogeographer (i.e., graveyard expert) believes that this sort of object is not in keeping with the Victorian period. The Victorian period sought to place a more optimistic approach to funerary symbolism, this object is more illustrative of the Georgian era and its memento mori.

Our retired Rare Book Librarian Elizabeth Guilford suggested that it could possibly be a Christian amulet of sorts and that it was possibly a stone missal that acted as a substitute for the bible, was possibly blessed by a priest, and that could then take the place of a holy bible as spiritual protection for someone who couldn’t read. This object is also the topic of a story by the author Alan Garner entitled The Stone Book where a young girl from a mining community is given such a stone bible (with a fossil inside) to carry to church by her father.

A cursory glance over the various interpretations of “stone books” garnered the following insights. As a symbol in the paintings of Bosch a ‘closed book’ represents ‘the futility of knowledge in dealing with human stupidity’. In Christian symbolism a ‘book’ most commonly represents the Bible. If open, it portrays truth or revelation, if closed, ‘it may be presumed to contain the names of the elect, and so may symbolize the Last Judgment and the inheritance of the saints’. We also learn that ”The book is the physical representation of knowledge and wisdom. It is the container of intellect; open books depict the book of life, learning, and the spirit of wisdom. Closed book is in the hands of God, Divine Mystery.’

Having viewed the stone book, the British Museum’s Early Christian/Byzantine curator could not recognise a period or culture that used such an article, stating “there are no comparable objects within our collection.”

So far our research has suggested two possible explanations for the stone book.

It could have been a stone missal that acted as a substitute for a bible. It was possibly blessed by a priest and then took the place of a Holy Bible as spiritual protection for someone who couldn’t read.

Or, it may have been a memorial for the dead. Just as a person’s life is said to be written in a ‘book of life’, meaning that as you live your life your book is written with the events, in death your book has come to an end and is closed. The closed book could be a memorial of one’s life.

I was contacted by one other local family that had a similar item passed down through their family. Their grandfather was a stone mason and they believed it had something to do with a ‘test’ of some sort.

It is very interesting that stone carvings and decorations on churches were the methods employed to educate and enlighten people into the stories of the bible, given that they couldn’t read the stories themselves. This gave rise to expression that churches were ‘stone bibles’. Given that it is clear that as literacy has improved, so has the decline in ornate sculpture that tells a story. I also thought of those works that came out at the turn of the century relating to the hidden wisdom housed within the dimensions of the pyramid and this idea that stone masons had been enlisted in some unspoken communication with the populace. These little stone books could be a memento of a silent and descriptive past passed down through the generations.

Stone Books From Across Time and the World

The most charming story that came my way was from Caroline Kenner in the United States. It relates to a dramatic incident that occurred in western Missouri during the Civil War era, not far from Kansas City, in a small town called Carrollton. I offer it below with her kind permission:

“Gionni’s mysterious book also made me think about this: I own a little stone book, carved of pale marble, with a wreath around my great-grandmother’s name on one side and the date 1861 on the other side. A row of hearts runs down the spine. The carvings and the “pages” were gilded but have gone a greenish black with time. Although much younger than Gionni’s book, it has an interesting story: My great-great-grandfather defended a man accused of murder, and protected him from the death penalty, although the man received a life sentence. He was so happy to be alive, he carved a set of little stone books for his lawyer’s four daughters as a thank-you gift. I am the great-granddaughter of the eldest daughter, and I still have her little stone book.”

Here are images of the stone book, with kind permission of Caroline Kenner:

A local researcher into the use of ritual objects in houses as a protection again magic and witchcraft, Mr Ian Evans, has also kindly sent us an image of a stone book in the form of a bible discovered in a fireplace in a house in South Australia. Other weird objects found concealed in homes overseas include heart shapes cut from felt, nail clippings and magic symbols written on the ceilings of bedrooms, and hallways with smoke from candles. “All my Australian finds are also pretty odd to be honest, but I’d have to nominate a marble bible as being my single oddest item,” Evans said. “It’s of the type found in graveyards. This small bible [sculpture] was found behind a firegrate in a house where it had been carefully placed on its side. It weighed 2.4 kilograms and it was obviously was no accident being there.

We have been greatly honored to present Alan Garner’s stone book. Mr Garner wrote the highly acclaimed The Stone Book Quartet. He writes:

“The stone book I wrote about exists and is in my possession. The book is so exact a copy of a tooled leather binding that, held correctly, it is credible up to within a yard. There are four shallow circles on the front, which will have been where a brass cross was set, but that’s missing. It also has a number of random ‘slashes’ around where the cross would have been. These I have interpreted as wear marks made by the book’s having been used as a convenient stone for sharpening a small tool. However, if the books served a protective, apotropaic purpose it could be that the marks were a deliberate attack by an ill-wisher. The subject of spiritual protection and aggression is a big one in this country, covering many centuries and many forms. ” And, “Now that I look closely at the scan, I don’t believe my earlier interpretation of “tool sharpening marks”. They are something different, and postdate the removal of the cross.”

I am currently accessioning the papers of Mr Jim Downie, local living treasure, retired businessman, Rotarian and Mayfield resident. His grandfather was William Ferrier(1853-1916), a stone mason whose specialty was working in marble. He was Clerk of Works for the building of Sydney’s Central Station among many other notable buildings including Gladesville and Callan Park Asylums, The Mutual Fire Insurance Offices, St Mary’s Cathedral and the A.J.S. Bank. Curious, I asked Jim whether he had a small stone book passed down his family, and he surprisingly said ‘yes’. His grandfather had fashioned these stone books for all the children as Christmas presents. They were also gilded in gold leaf. I will photograph this book this weekend.

An online correspondent has sent us his images of a stone book recently purchased. We thank him for sending through his images for researchers on this site. Jim writes:

“I [happen] to have one of these mysterious stone books, it takes the form of a bible that has a cross carved on the front and a similar binding type carving to the first book on this web page.

Un-believably I bought it on ebay some months ago and although I had no idea about the book itself I knew I had to have it. The person I bought it from couldn’t give me any information about it but said she thought it was Egyptian Marble?

When I received the book I then started to do a little research and couldn’t find anything until I eventually found this site a couple of weeks ago. I will take some pictures and send them to the email address that is listed on comment 6. 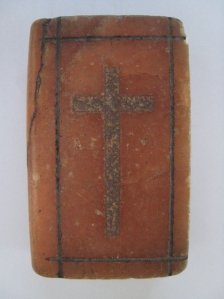 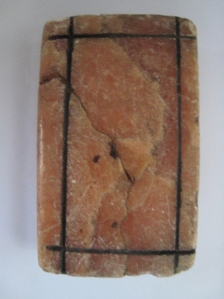 To Whom It May Concern,

I am De Jonghe Walter from Belgium? I wrote to you before about the stone book I found in Belgium. Look up the article about this please. Due to circumstances I can only send you now the photo’s of the stone book.

The Stone Book,
I am Walter living in Kruibeke a village nearby Antwerp in Belgium. As a yuong boy of 14 (now 62) a walked the borders of the river Schelde by my village. The water had wached away the sand, and with other things this book of stone came to the surfice. As I was collecting antiek given to me by both my grandparends I always had this item in my collection. Did not know wath it was, but it give me a feeling.it was something special. The front of this book as a cross upside down, as they use in the church of desiple Petrus. On the smale side is written( but you kan see much later and is different) “key of heave” (see the fourth image of the spine below) . I am verry pleased to find this webside, now I know there are more of those books! Sorry for my poor Englisch writting, give you my greethings, Walter 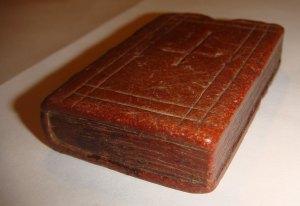 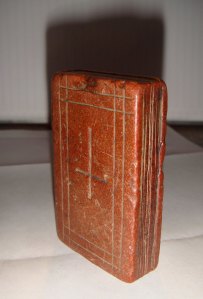 David Thomas Ansted in his work “The Great Stone Book of Nature” (Philadelphia: George Childs, 1863) says that Nature is akin to a Library. To him the “Great Stone Book” is the science of Geology, where the vast knowledge of the Earth lies, waiting for “careful personal observation and an acquaintance with the language of nature.”

Whatever its original purpose, our stone book has us intrigued and it is a welcome addition to our Collection.

Gionni Di Gravio
Halloween 2007 and beyond