As part of the Local Treasures show University of Newcastle Archivist Gionni Di Gravio brings in an authentic piece of a British Airship from the First World War from William Dalton (Dalton Family papers), and a book on Balloons from the Library of Professor Godfrey Tanner.

You find the most amazing objects in an Archive. Years ago I came across a piece of a British Airship which I Like to think was a Zeppelin. Like most things when you try to remember where you saw it, you can’t remember. Well, yesterday I found it again among the Dalton Family papers. In a correspondence file of letters to William Dalton (1897-1974) during the First World War was a folded blank form, “Report of Sighting Enemy’s Battlefleet”. In the folds it held three pieces of solid material. The note on the reverse of the form (in presumably William Dalton’s handwriting) said:

“This is the form that the airships use
for sending messages via carrier pidgeon
of which they carry about three.

The rubber fabric is what the envelope of
our patrol airships is made of.
Charlie gave me this. They have a R.N.A.S. man boarding there.
The outside of the ship is painted alluminium colour.

There is no inner envelope to hold the gas
this is the one and only envelope used.” 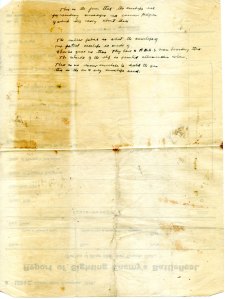 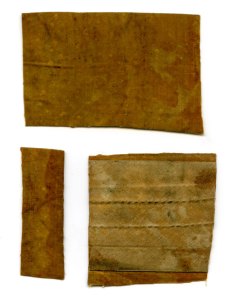 Inner side of the Airship

Biographical note. William Dalton was 11th March 1897. According to Jack Dalton’s pamphlet entitled William Dalton of “Riversdale”, Scone [c1974] after studying at Newcastle’s first high school (known as the Hill School), William Dalton became an engineering apprentice with Morison and Bearby at Carrington, and attended the Technical College at night. He served with the Fortress Engineers at Nobbys prior to joining the A.I.F. in April 1917. He served two years in France. After the Armistice, and awaiting passage home, he worked for Kincaid’s shipbuilding works on the Clyde, Scotland.

After his discharge in December 1919 he began dairy farming with his brother Harry at Sandy Hollow. In May 1923 he married Anna May Gibson of Singleton and had two children Jack and Gwen. He sold his interest in the dairy farm to his brother and in 1934 bought ‘Riversdale’ near Scone, where he remained for the rest of his life. In 1937 he began share wheat farming on ‘Nandowra’ which continued through the war years. In the sphere of community affairs he was instrumental in the formation of the Parkville Bushfire Brigade in 1944 and served as Honorary Secretary until 1970.

An active campaigner for the health of the local environment in 1946 he organised a planting of a Pioneer Memorial Drive at Parkville on Arbor Day, which led to the formation of the Parkville Progress Association to which he was foundation member and served as Vice President (1947-1949) and President (1950). He was also a member of the Upper Hunter Re-afforestation League and urged for the establishment of offices for the Soil Conservation Service and Forestry Commission in Scone.

In December 1947 he was elected to the Shire Council and campaigned for the formation of the Upper Hunter County Council, which became a reality on the 1st October 1953. Among his other achievements was the establishment of the Public Library, which was officially opened in July 1954 by the Governor of New South Wales Sir John Northcott. In April 1954 he resigned from Council.

He was a foundation member of The Hunter Valley Conservation Trust that was formed in 1950. In 1958, as part of the Trust’s work, the Barrington Tops Bush Fire Prevention Association was formed to create fire trails to prevent the destruction caused by bushfires in the area. He served as the Trust’s representative and Chairman from 1960 until 1965.

On the 21st March 1956 he convened the inaugural meeting of the Scone and Upper Hunter Historical Society, and was elected its first President, an office which he held until his retirement in 1969. He continued to be involved in the Society’s affairs and activities, and in 1973, along with Mr Wilfred Green, (the Society’s first Honorary Secretary) was unanimously elected as its first Honorary Members. Following his wife’s death on the 17th July 1971, his own health deteriorated and he died on the 22nd June 1974.

Mr colleague Dr Edward Bridle has a family connection with airships. He writes:

My grandmother, D.E. Cresswell, was an eyewitness to the first Zeppelin brought down over England during the Great War, in 1916. She was a young woman at the time, living in Ash Vale in Surrey (just across the county boundary from Aldershot, in Hampshire). The Zeppelin had been raiding to the north of London, but its destruction was visible for miles. It had been caught by a R.F.C. pilot at a height of 12,000 feet – almost higher than the aeroplanes of the time could manage – and set on fire by tracer bullets. It was coming down, afire from end to end – not plummeting, as an aeroplane would do, but falling slowly, as the burning hydrogen gas took away its lift – and the crowd where my grandmother was watching was cheering; then a woman’s voice was heard to say “There’s some poor mothers’ sons in that,” and from that moment on, they watched in dead silence.

Years later my grandfather, whose ship was in Rio at the time (this would be in 1930), sent her a letter by airmail. It was carried across the Atlantic by the famous airship Graf Zeppelin. (That letter is now in my possession).

To bring an even wider historical perspective, I’ve also brought in a beautiful treasure from the Tanner Collection on ‘Balloons’. It has some beautiful illustrations from the dawn of the ‘new vehicle’ of the Balloon which began on the 21st November 1783. 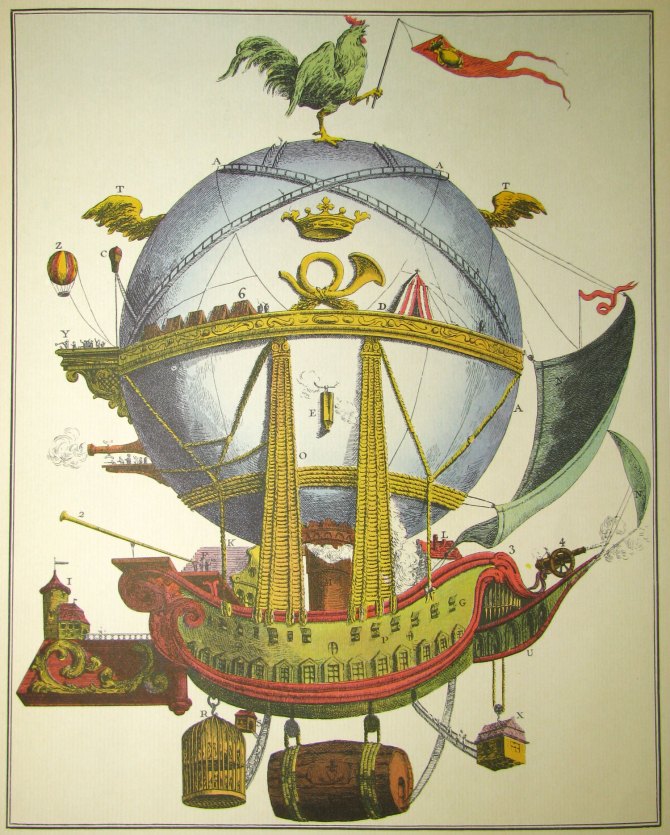 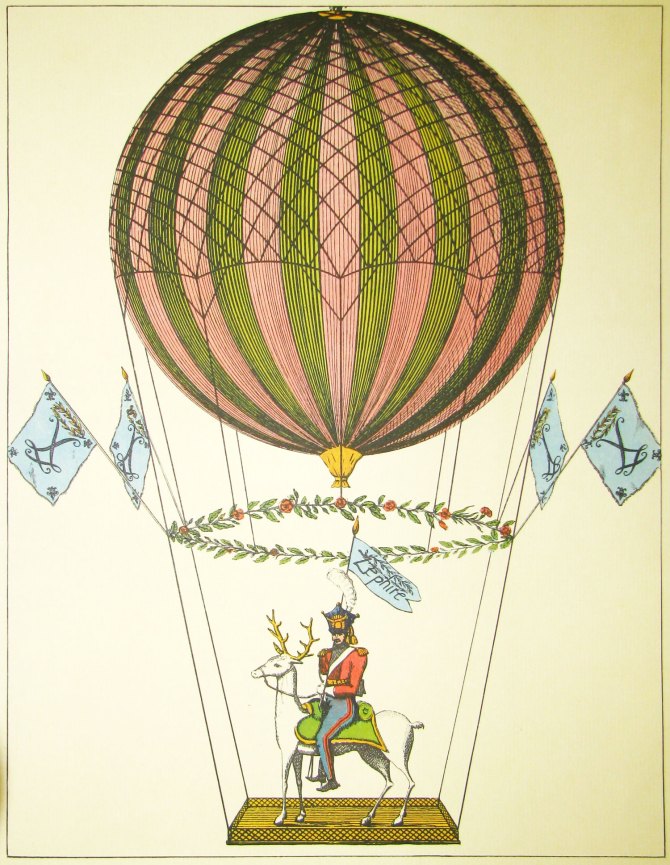