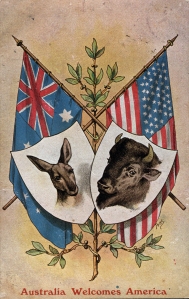 In 1908 President Theodore Roosevelt despatched the US Navy Atlantic Fleet on a round the world tour. Sixteen ships and 14,000 men left port in Hampton Ponds, Virginia for South America, Hawaii, New Zealand, Australia, the Philippines, Japan, Malaya, and back home through Suez and the Straits of Gibraltar. The tour took 15 months, and was a diplomatic and popular success. 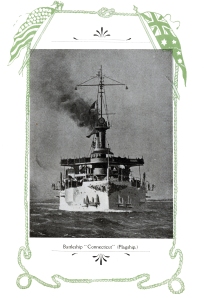 At every port of call there were great welcoming receptions, taking the form of military parades, balls, dinners, excursions into the countryside, and invitations to homes and families. In Australia, the ships visited Sydney and Melbourne, and called at Fremantle before leaving the country. In Sydney, two days of the six that the ships were in port were declared public holidays, so people could celebrate. Fireworks and lighted buildings added spectacle, and the American ‘Jackies’ were guests at theatre performances and public displays. Baseball matches and rifle shooting contests were held in their honour, and all these entertainments attracted hundreds of thousands of spectators. The Commonwealth Military Forces of New South Wales staged a review and march-past comprised of more than 13,000 men and 2000 horses to mark the visit.

On Saturday 22 August, a party of US sailors took a train journey to visit Newcastle. The Newcastle Morning Herald and Miners’ Advocate of 24 August 1908 reported:

One hundred and ninety officers and men of the American Fleet visited Newcastle on Saturday…The special train conveying the visiting party was timed to reach Honeysuckle Station at 10.58 a.m. and a few minutes later she steamed in. The members of the reception committee, headed by the Mayor of Newcastle (Alderman Cook), were on the platform waiting to receive the visitors. Mr F.C. The visit of the American Fleet Govers of the Intelligence Department, accompanied the party, and saw to the comfort of the men on the train journey. Major Mulholland, the Master of Ceremonies, was the first to board the train, and having ascertained that Lieutenant Nelson of the Minnesota was in charge of the party, introduced that gentleman to the Mayor. The men were afterwards formed up, and headed by the reception committee, marched over the bridge to the railway station where the official welcome took place.

There was also the presentation to the party of an illuminated address, beautifully bound in morocco, with a suitably inscribed silver shield on the outside cover, and containing two large photographic views of Newcastle. We assume this is still in the possession of the US Navy. By the time the ships left Melbourne, the fleet was about 115 sailors lighter than when it had arrived; apparently the charms of the Melbourne ladies were more tempting than life at sea. 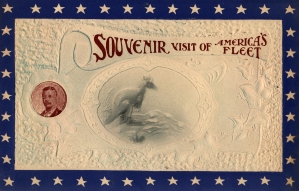 There is a display of memorabilia from the visit of the American Fleet in the foyer outside Cultural Collections in the Auchmuty Library of the University of Newcastle, Australia. We have digitised the booklet, Souvenir of the visit to Australia of the American Fleet, 1908, Sydney : [s.n., 1908] (Sydney : Deaton and Spencer) and made it available via our Flickr site. Some of the posters in the display and a few others are also available on our Flickr site. If you would like a higher resolution copy of an image, please contact us.