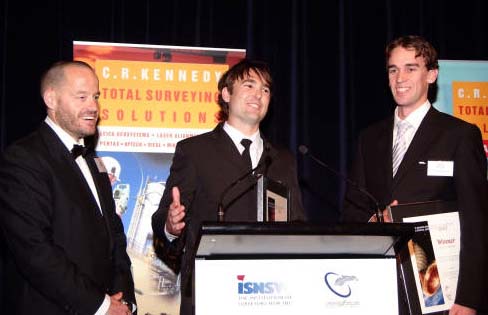 John Wilson and Alex Widgery have won the University Student Project category in the 2007 New South Wales Institution of Surveyors Excellence in Surveying Awards for their work on the Coal River Project.

The black tie function is held every year by the Institution of Surveyors N.S.W. and was attended by 350 people. The event was held last Friday night (28th September 2007), and hosted by Adam Spencer of ABC fame, at the Westin Hotel in Sydney.

The New South Wales Excellence in Surveying and Spatial Information judges confer individual awards in the categories of Professional Surveyor, Young Surveyor, University Student Project, TAFE Student and Journalist of the Year with the aim of attracting young people into the profession and promoting its diversity and opportunities. 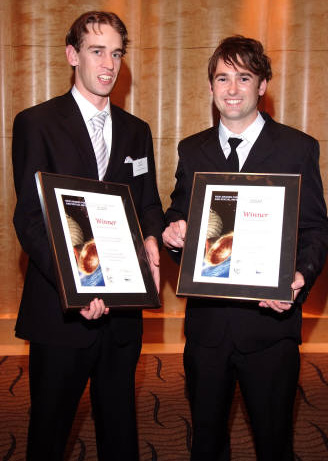 The Excellence in Surveying and Spatial Information Awards enables the industry to celebrate the achievements of some of the finest professionals and organisations in the country. Winners will be automatically entered into the national Asia Pacific Spatial Excellence Awards.

This is distinct from last year’s award to Monteath and Powys Pty Ltd, the Coal River Working Party’s surveyors who won the People and Community section of the 2006 NSW Awards for Excellence in Surveying and Spatial Information for their work in locating and rediscovery of Newcastle’s historic convict coal mines located under Fort Scratchley.

Congratulations to John and Alex on this fabulous achievement.

Click here for more information on the University of Newcastle’s Coal River Project.